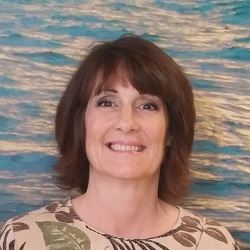 Several weeks ago I had a scheduled meeting with the owners of the spa. We talked about many things including an increase in my responsibilities. I was pleasantly shocked when they told me they were sending me to Hawaii to do some additional lomi lomi massage training. I was super excited not just to experience a full week of lomi training but to go to the islands I hadn’t seen for several years. I was also getting a chance to visit the big island of Hawaii for the first time.

After landing in Honolulu, I had some time to kill while I waited for the island hopper to Hilo. I found a beautiful little courtyard outside at the airport to eat my lunch and let the smells and feel of Hawaii soak in a bit. I then made the hop to Hilo which is a small, very nice little airport. I think they only have about 8 gates! I was picked up by a van from the place where the training was taking place and met a couple of the people I would be training with.

Our training was taking place at a beautiful rustic retreat named Kalani. I had no idea what to expect either from Kalani or our training. Kalani is very rural and is located in an area of the big island named Puna. While they do have a pool and a Jacuzzi that’s where the similarity to a resort ends. At Kalani feral pigs roam the property (the piglets are adorable) along with mongoose, lots of geckos and coqui frogs that sound like birds in the trees. None of these animals are native to Hawaii but they were fun to have around.

The training itself was intense. We did yoga first thing in the morning then had breakfast. After breakfast we trained until lunch, trained again after lunch until dinner and then met after dinner for “circle” where we talked about everything that happened that day. The facilitators were fantastic and was able to make some technical improvements to the lomi techniques I learned at the spa but I also learned a lot about something called ho’oponopono. Ho’oponopono is all about reconciliation and forgiveness not just for yourself but for your ancestors and descendants as well and it is closely associated with the spiritual aspects of the lomi lomi massage.

The most important thing to me about my trip was getting a bigger picture of lomi massage. While the lomi “style” of massage is different than other massage modalities it’s so much more than just a series of strokes or using your forearms. It really is a whole way of looking at the world, the people around you and yourself.

I’m so grateful for the opportunity to experience the whole trip and I’m really excited to take on my new role as senior lomi lomi trainer in the spa so I can share everything I’ve learned with the rest of the o’hana.